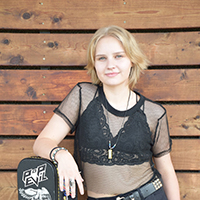 The Unicorn chats to South African/German born singer, songwriter, and actress. Storm online from Atlanta. Living in the USA, she is known for her singing and theatre work.  Storm began performing as a child, singing  and acting in school plays, community theatre, student films and writing her own songs.  She plays the guitar, bass guitar […]

The Unicorn chats to South African singer/songwriter, Cara Frew on the Drive Zone. Coachella Music Festival performing artist Cara Frew has the world, “Waiting For Love,” until the release of her epic new single on the 24th of June. She is a South African born singer-songwriter, living in London. Cara’s debut album, “Flame,” was released […]

The Unicorn chats to the fellows from Kidnapped By Gypsies about life under lock-down and the release of their song, “Forest Moon”. Kidnapped by Gypsies is a South African rock band based in Alberton, Johannesburg. The band was formed in 2016 by guitarist Edwin Odendaal and drummer Travis Burrows. Jayson O’Brien joined on bass guitar […]

The Unicorn chats to Vickus Horne from the Cape Town band, Cherry Vynil, about life under lock-down and the release of their latest song, “Simunye”. For more information about the band, please visit their Facebook page and YouTube to view the music video.